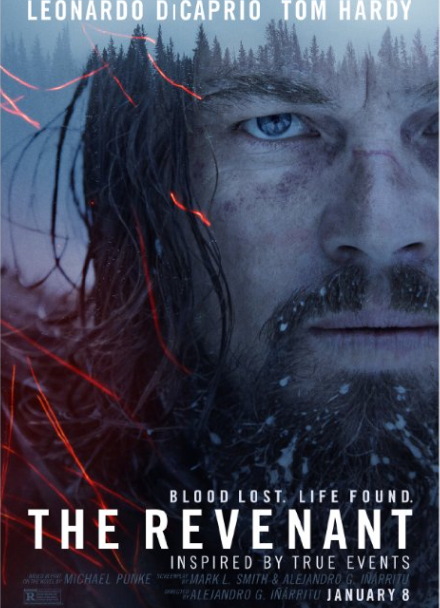 The Revenant; the movie that almost got DiCaprio killed. To be honest, I went in knowing nothing about the story, what it’s about, who starred in it (besides DiCaprio) and walked out after the credits (I needed time to process) without any regrets about seeing this movie.

“A frontiersman on a fur trading expedition in the 1820s fights for survival after being mauled by a bear and left for dead by members of his own hunting team.” [IMDb]

At first, we see DiCaprio, who plays Hugh Glass, with his son Hawk (Forrest Goodluck) hunting. We quickly learn they’re in the fur trading business. Then, the rest of his team gets attacked by people who want to take the fur and will kill everyone in order to do so. As soon as Glass reunites with the rest of his team, we learn that he’s quite important in order for them to get back to their base.

Many people are killed and their team is still shrinking. What happens in this movie is horrible. They kill and get killed in such a rate that I honestly no one will survive after the first 45 minutes.

As Glass gets injured by a bear attack, he is unable to walk on. His team makes him a gurney so that they can still take him as far as he can go. Some disagree, saying that it will slow them down too much, proposing they leave him there for dead. If I didn’t already, I wanted to punch some people to kick some sense into them. You can’t just leave someone behind. Luckily, they don’t.

Glass is not out of the woods yet (pun intended). As the team gets divided into two groups, one that will find a quick way back to their base and one that takes Glass as far as possible, the one that wanted to leave him behind, kills Hawk and finds a way to make that happen and Glass is left behind, with the others thinking he had died.

If I could decide who gets to win an Oscar, it would be DiCaprio. He was incredibly convincing in this movie. He was the one to pull me into this story without even knowing what it would be about. He doesn’t say much in this movie but I could clearly hear what he had to say.

Everything that happens after he is left behind is so intense and so dramatic, I wanted to walk into the movie, bringing blankets and tissues because DiCaprio’s character deserves so much more.

One thing I found really beautiful was Will Poulter’s character, Jim Bridger. After being tricked into leaving Glass behind, he has had guilt eating at him in every minute he appeared on the screen. I could feel my own heart and the hearts of everyone else in the cinema break at the end of the movie. It was intense.

One more thing I will have to praise; the visuals. The make up, the wounds, everything. It looked amazing. It is definitely worth a shout out. Sometimes too real, almost gag-worthy at times.

This movie is a must see for all DiCaprio fans. Also for his not-fans. Everyone should just watch this movie; it is THAT good.