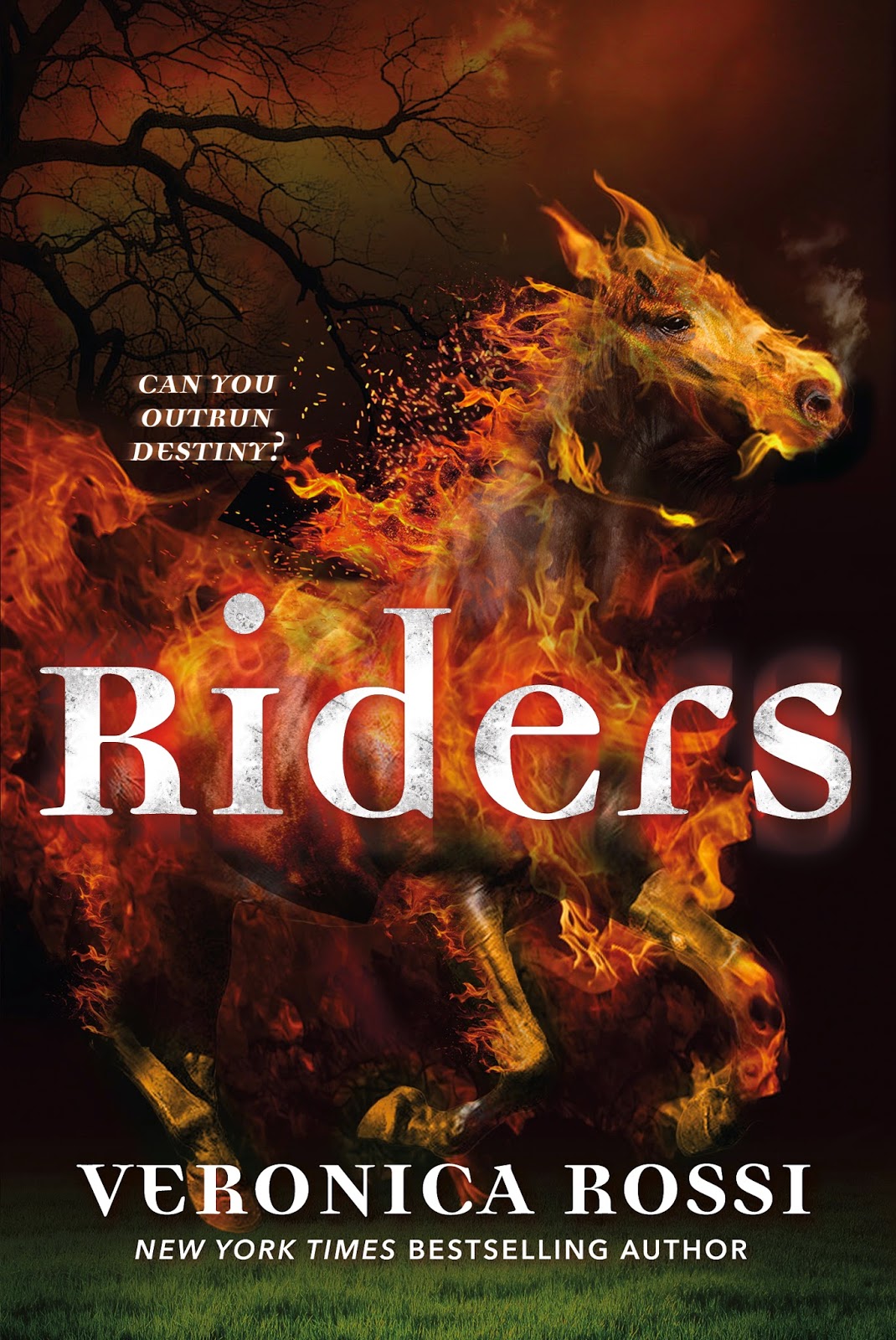 Since I’ve been a big fan of Veronica Rossi’s books, my expectations of Riders were pretty high. The cover is bad-ass, and I was hoping that the content would be bad-ass too. Sometimes it’s dangerous to have high expectations, because books cannot always live up to the hype. With this book, that was party true. I think it’s fair to say… that I need a second book!

“Nothing but death can keep eighteen-year-old Gideon Blake from achieving his goal of becoming a U.S. Army Ranger. As it turns out, it does. While recovering from the accident that most definitely killed him, Gideon finds himself with strange new powers and a bizarre cuff he can’t remove. His death has brought to life his real destiny. He has become War, one of the legendary four horsemen of the apocalypse.  Over the coming weeks, he and the other horsemen—Conquest, Famine, and Death—are brought together by a beautiful but frustratingly secretive girl to help save humanity from an ancient evil on the emergence.
They fail.
Now—bound, bloodied, and drugged—Gideon is interrogated by the authorities about his role in a battle that has become an international incident. If he stands any chance of saving his friends and the girl he’s fallen for—not to mention all of humankind—he needs to convince the skeptical government officials the world is in imminent danger.
But will anyone believe him?” [Goodreads]

So there’s a boy, who almost died while falling from a helicopter. He wakes up, and finds himself in a weird situation. The doctors told him, he was basically dead. But due to some miracle, he survives his fall. And not only that: his recovery is amazing and most of all inhuman. How can somebody who suffered from such a high fall, recover within only a couple of days without any pain? Veronica really starts of the novel with a mysterious vibe. As a reader you want to immediately know: what happened? Why is this guy still alive? And how could he possibly recover THAT fast? Throughout the novel, Veronica slowly reveals what secrets are being kept from Gideon, as he finds himself in some dangerous situations risking his life for the people he loves.

The story is told from only Gideon’s perspective. There are two story lines in the book: the first one is Gideon locked up somewhere telling the story about his miraculous recovery and everything that happened after that, and the second one is the story he’s referring to. At the beginning, this is a bit confusing, as it is not clear where Gideon is. Is this the now? Is this the past? Soon enough you will find out that there’s a rhythm, and the story will build up itself from the ground.

Gideon as a person was for me hard imagine. He changes a lot throughout the novel and at some points that really confused me. I couldn’t foresee what he was going to do or how he would react to certain situations. But maybe that’s an element that also really made this book so exciting. I do have some critique on him, as a character, but also on the other characters. When one is told he is part of an apocalyptic group, specifically War, having a horse that is on fire, one cannot accept that as if you’re doing your groceries and the lady announces the plastic bags aren’t in stock. No. You freak out, right? Gideon seems to accept it all. Like: what the heck dude, how is this normal? Why aren’t you screaming? This was something that frustrated me throughout the book. But you know, if he wouldn’t have accepted his fait, the book would’ve been much shorter and he’d be death halfway his journey. I think it’s all about balance. Hopefully Gideon as a character will progress throughout the series.

What I liked about the book the most was the way Veronica described all of the surroundings. It felt as if I was with the characters themselves. The surroundings were clear, real and dynamic. They moved around a lot which is something I appreciate. While reading this book, you will experience it as if being on vacation: hot deserts and ice could mountains, Veronica covers them all.

On a last note, I do think I miss a little bit of world building. But that’s okay. There are many more books to come, and since we experience the events from Gideon’s POV, we don’t know everything. We know what he knows, and that’s not much. I’m hopeful for the next book. I want to know more about the mythical world they seem to live in. It all sounds very exciting. I need more of it!

Overall I really enjoyed the book. It was not fast paced, but fast enough to finish it within three days (which is good, I think). There was a good balance between showing and telling, and Gideon threw in a couple of jokes every now and that. I can always appreciate a little bit of humor in a book, since stories sometimes tend to be a bit dark. Riders is an exciting read, with an incredible mythical world I need to read more about! Veronica, I cannot wait for the next book in this series!