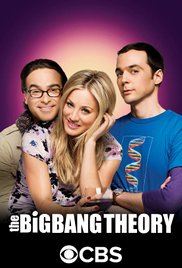 Leonard Hofstadter and Sheldon Cooper are both brilliant physicists working at Cal Tech in Pasadena, California. They are colleagues, best friends, and roommates, although in all capacities their relationship is always tested primarily by Sheldon’s regimented, deeply eccentric, and non-conventional ways. They are also friends with their Cal Tech colleagues mechanical engineer Howard Wolowitz and astrophysicist Rajesh Koothrappali. The foursome spend their time working on their individual work projects, playing video games, watching science-fiction movies, or reading comic books. As they are self-professed nerds, all have little or no luck with women. When Penny, a pretty woman and an aspiring actress from Omaha, moves into the apartment across the hall from Leonard and Sheldon’s, Leonard has another aspiration in life, namely to get Penny to be his girlfriend. IMDb

I love this show so much. The show really developed in a good way over the years, making itself the ‘Friends’ of this time. This series has a lot of memories for me, memories of me and my dad watching it while we’re laughing so hard. So every new episode I kind of feel those moments again.

The humour is fantastic, maybe not if you fall right in at a late season while you haven’t watched the others. But if you get to know the characters the humour only becomes funn

ier in some sense. The whole idea is nerdism versus the real world. That contrast is what this show keeps going. The nerds are in the beginning really, really nerdy. But it’s fun if you’re nerdy because you get to recognise some things. There are a lot of references to huge franchises like Star Trek, Star Wars, Marvel and the DC Universe and so on.

The characters really grow per season and that’s very important, otherwise the show would become tidious and frustrating. But it moves along at a steady pace. The rhythm of the show is very pleasant. (With Sheldon sometimes to slow)

Romance is a huge part of this show because of the lack of it that nerds tend to have. Penny is a big part of the whole story because she provides a new sort of breeze in the nerds their lives. For them and for her to cope with that is so interesting to watch in the first few seasons. Then a lot of new characters come along, some stay and some go. But Penny, Sheldon and Leonard are the main parts of the wheel that keeps this going. Sheldon at the most, he is kind of crazy. This brilliant genius has al kinds of peculiarities that are really, eh, interesting? He acts like a child, has the size of a man and has a brain like an Albert Einstein. Along with shy Rajesh, horny mother loving Howard and desperate Leonard they are a funnu group.

The only thing about this show that bugs me a little is the quality of the humour in the last few seasons. It could be me that I find it irritating but the last seasons are a bit ‘mweh’ for me if you understand what I mean, the first few I found a lot more funnier. But that’s something you have to decide for yourself because everyone’s taste is different.

So, in a nutshell: couple of nerds who want love and nerd stuff become friends with a hot girl that change their lives and find themselves in funny situations.