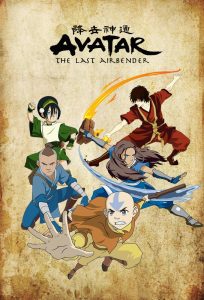 The world is divided into four elemental nations: The Northern and Southern Water Tribes, the Earth Kingdom, the Fire Nation, and the Air Nomads. The Avatar upholds the balance between the nations, but everything changed when the Fire Nation invaded. Only the Avatar, master of all four elements, can stop them. But when the world needs him most, he vanishes. A hundred years later Katara and Sokka discover the new Avatar, an airbender named Aang. Together they must help Aang master the elements and save the world. (IMDb)

I know this is not the typical series I or Judith would normally do an introduction of, but this series is mostly loved by young adults! This show could be my favourite tv-show of all time. The whole thing is really nice put together and the nostalgia from my childhood also plays a big role, of course.

First of all: It’s so funny. The humour is a mixture of cartoonish reactions and really sarcastic humour. Which is right up my alley! Not just the main characters are funny, whole situations and animals too. Second, I really love the fantasy element (get it hahahaha). I really wish that we could really bend elements and kick everyone’s ass. The ways the characters bend are really diverse and innovative. Third, the story. Wow, the story! The three nations are at war with the fire nation which Avatar Aang has to solve. He is the main character, but Zuko (the banned fire heir) also has a big storyline. The way they circle and ultimately join together is great. The mini story arcs are also amazing, everyone has a backstory which plays a subtle role.

Fourth, (I could almost go on to hundred) the characters are fantastic. It just fits you know? Just like the cast of Friends or a great puzzle. Aang is the silent and peaceful one, Katara is the strong and bossy one, Sokka is the brave and funny one and Toph is the rock hard (haha) and mocking one. Together they are a great team with their animals Momo and Appa.

The way the serious and lightness of the situation balance eachother is also great. Because this kid of twelve years old needs to save the entire world but he also likes to have fun and has a crush on Katara. (No spoiler because when you see the first scene it tells you already)

The only thing I don’t like is the lack of backstory after it ends. The show has a sequel: The Legend of Korra. When you watch that you really get a lot of questions you want to be answered, so it leaves a question mark on both shows while they’re really great.

I tell you, if you haven’t watched this. Please start! You will fall in love with it. I could kind of compare it to Harry Potter. (You’re the Avatar, Aang!) The journey the show tells you is one you want to experience.

Please tell me what you think of this classic show and have a great week!