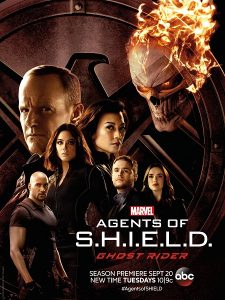 Each season has a very different storyline, so to capture that in one paragragh is very hard. But in general it’s about a certain district of S.H.I.E.L.D agents who work together to protect the people of enemy threats. But it’s in line with the MCU, so every movie crosses over with the show and sometimes a movie character has a cameo.

First of all, the cast of this show is absolutely amazing. They’re so good, I think they can pull off any character. Chloe Bennet and Brett Dalton have really grown if you look at the first and last episode.

The dynamic of this show is very unique I think. Arrow, Flash and Legends of Tomorrow are great superhero shows but AOS doesn’t have the same routine every episode, so it keeps things interesting. Also, the show gives us a wider context of the MCU, the movies do really have effect on the show.

The team consists of very different kinds of people, the leader Phil Coulson (yes that is Phil Coulson who dies in Avengers, and isn’t a spoiler because he is a serious regular when u look AOS up) is the one that keeps it all together. Then you have the muscles and science nerds/tech geniuses.

The series really takes you all over the world, you have a couple of central bases they come regularly but you see a lot of different places. The story has a couple of flaws in the beginning I must say, it’s too flat (if you know what I mean). It was still finding itself in season 1 but after that really improved.

The down side is, to really enjoy this show you have to see all the movies. This isn’t a series to watch just now and then, you have to put a little effort in it. If you aren’t a fan of the Marvel movies, or don’t like them it’ll be a lot hard to keep up and understand everything.

In this show you get to see exciting missions, plottwists, evil plans, inhumans, magic and a lot of humour. I can’t really tell you anymore because I don’t want to spoil anything. 🙂

Please comment down below what you think of this great series!