Storyline: A sexy, suspense-driven legal thriller about a group of ambitious law students and their brilliant, mysterious criminal defense professor. They become entangled in a murder plot that will shake the entire university and change the course of their lives. (IMDb)

So I first stumbled upon How To Get Away With Murder on Tumblr. That’s usually not a good sign. But this time, it was.

So, to start of, remember one of the only black kids in Harry Potter, Dean Thomas? He was supercute, even though he didn’t really have much lines. Here is a lovely photo to refresh your memory.

Adorable right? Well this lil’ cupcake has grown up to be this HOT ASS BABE named Wes Gibbins:

I mean ditch the lumberjack flannel with the horrible colour scheme, and with that the rest of your clothes please (Am I right ladies, hell yea).

So as the title suggests, this show teaches you how to get away with murder. Although not really. Wes gets accepted in one of the most prestigious law schools, in a class lead by Annalise Keating (played AMAZINGLY by Viola Davis). While she is hella strict, she is also hella successful. She choses a group of top-students to work with her on her personal cases, and Wes is one of them (to his big suprise). From there on things really go downhill, cause you know they murder someone (lol check the title).

The series starts with a whole lot of ‘random’ flashbacks, which all build up the course of the day as you will later see, piece by piece. The whole series really is overdramatized, oversexualized, but it’s amazing nonetheless. It actually made me want to go to lawschool (even though I’m currently studying Literature), knowing that this show was as unrealistic as could be. BUT STILL.

One of the things that I LOVE about this show is its eye for current issues in society such as rape, racism, sexism, mysogony etc. The series highlights this at a very subtle manner, but if you have an eye for it (like I do after having seen countless of horrible sexism and racism filled films/series/news) it’s unmistakable. The cast is very diverse: we have a black woman as the strongest lead you will ever see in a drama like this, a black teen, a (immigrated) hispanic girl, a black girl, a gay guy (which later becomes 2 gay guys ay), a rich white boy (cause they’re everywhere lets be honest), a son of Italian maffia, a woman who seems to be quiet as heck but is actually coldblooded af (#lifegoals), a lesbian, a bisexual. You name a point in the spectre of gender, race, nationality, sexuality and it’s probably represented in the show. Here is an example of the importance of selflove, portrayed in the series by bae Michela. She shuts down her lover’s mother and at the same time breaks up with her boyfriend, because she believes (RIGHTLY SO!) that selflove should come first

As I have said the lead character Annalise Keating is portrayed by Viola Davis. Never have I EVER seen such an amazing character. She is very emotionless (needed for being one of the most successful defense-attorneys), but her personality has so much depth!!! She is not afraid to show emotion to the ones that she loves, but she also knows how to stay professional and KICK. ASS. The more you watch the show, the more you get to know about what shocking things happened to her, which helped her shape the way she is now. Also, her make-up skills are out of this world (that countour man). 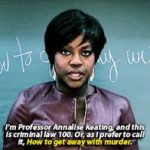 So, while this series certainly has noticable American aspects (lots of sex, lots of drama) it highlights so many different aspects of society and shows that there are still problems, even though they may not be as visible as they once were. It is a series that carries a lot of weight, something that you definitely do not expect when starting this series. I love them for this. I have cried so hard exactly because of the amazingly accurate portrayal of the unjust things in this society, about things that I cannot believe still exist. A modern medium like TV, and series seen by lots of youths is another (effective) manner of showing the wrongs in a society and making people realize this.

Please watch this. While enjoying a dose of (gay) romance, drama and humor it carries an important message. IT ALSO IS HELLA INTENSE. But when you think everything has REALLY gone to shit and it couldn’t possibly get any worse. It does. ANNALISE TO THE RESCUE! (The first season is on Netflix so what are you waiting for??)