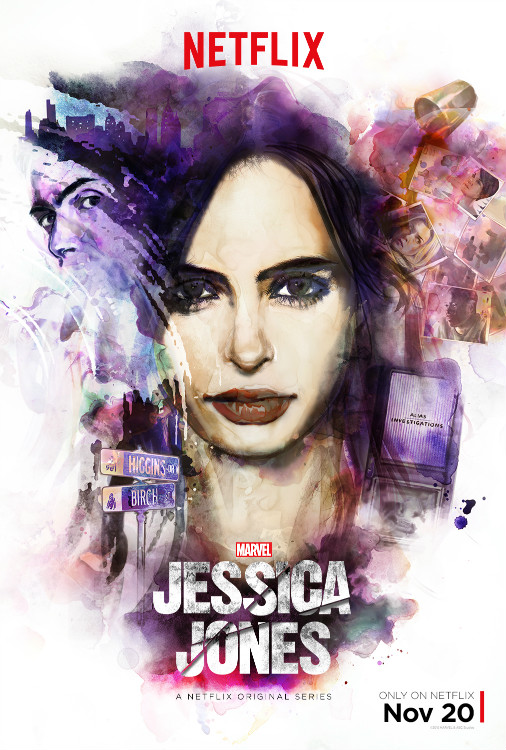 Storyline: Ever since her short-lived stint as a superhero ended in tragedy, Jessica Jones has been rebuilding her personal life and career as a hot-tempered, sardonic private detective in Hell’s Kitchen, New York City. Plagued by self-loathing and a wicked case of PTSD, Jessica battles demons from within and without, using her extraordinary abilities as an unlikely champion for those in need… especially if they’re willing to cut her a check (IMDb).

So the Netflix-Original series Jessica Jones has been up for quite some time now. I must admit I have only just recently seen the whole series, but it was AMAZING. I mean it’s Marvel so that’s an automatic 10/10. Except Ant Man but I don’t wanna talk about that (I MEAN A BLOODY ANT? WHEN YOU COULD HAVE DONE A BLACK WIDOW FILM?).

Just a little background info. Jessica Jones is your not so average ‘superhero’ who detests stupid superhero names and suits, but rocks the I-just-woke-up-and-I-am-hungover-as-hell-so- don’t-bloody-talk-to-me look. She is a heavy drinker and a heavy lifter. I mean literally. She has superstrength. Now I can hear you thinking, ain’t that a bit basic? Well, lemme tell you. It ain’t. Trust me. Jessica is amazing and her sarcastic humour and general dislike of people makes her very relatable (minus the whole superstrength and flying thing. Unfortunately). Now this sounds wonderful but then there is this stupid ‘Kilgrave’, a Doctor-Who evil incarnate. (Are you fucking kidding me? Was ‘Murdercorpse’ already taken? – Jessica Jones, 2k15). He has this whole mindcontrol thing, but uses it to ‘persuade’ Jessica into coming with him, because he so-called loves her. Hmm..? What’s that smell? Oh yes, BULLSHIT [G]. He does not ~love~ her, he just wants some attention and is generally just a creepy stalker. Jessica has been under the influence of Killgrave before and is now determined to stop him before he makes any other victims. Oh, and did I mention that there is this handsome man named Luke who has unbreakable skin and a huge love for puppies? Great combination, trust me.

Well this has been a lovely little introduction, but now.

Now that we have that out of the way.

As I said before, the first season just ended in the most amazing way possible. Jessica realizes halfway through the season that she has become immune to Killgrave’s ‘I-Have-Daddy-Issues’ ~powers~. She is trying with the help of her on-and-off best friend Trish and puppy-lover Luke to first catch Killgrave, but then actually kill him. In the end scene, the Doctor Who Evil Twin mindcontrols Trish into kissing him (NOT okay), and then.. also controls Jessica.

Erm, like, you were immune right??? What is happening???? Jess??? Plz??? I was lowkey (who am I kidding, highkey) freaking out and I did not know whether she was faking it or that this was the real deal. Turns out, neither did Murdercorpse. And when he tells Jess to kiss him… Jess comes closer and… SNAPS HIS BLOODY NECK. I could not believe it, I was so happy, I almost spilled my tea. Shortly after that, the series end.

But then I was like STOP, wait a minute (fill my cup, put some liquor in it). What if he has this supersonic vertebrae and, I don’t know, fluid bones that will make his spine go all normal again? He had taken this weird concoction made by his dad which increased his powers. Maybe this is a bit far-fetched but still. He could get away with everything during the whole series, why couldn’t he this time?

Maybe he is like a sort Genos (One Punch Man, great anime, you should watch it) who can literally be blasted to pieces and still be okay. Well. Maybe he is not a cyborg but still. When Jessica ‘I’m-Not-A-Bloody-Superhero’ Jones killed him, she did not check his pulse or use a gun to shoot him in the head 2+ times to make sure he is really dead (something that I would have totally done to a superduper-dangerous man and creepy as heck stalker/lover). And if there is something I’ve learned from any series is To. Never. Trust. ANYTHING. Remember the Glenn-incident in The Walking Dead?,  the Red Wedding in Game of Thrones?, the Reichenbach Fall in Sherlock?. You get my point.
So, while I loved the series, and the little Daredevil crossover with Claire ‘Too-Good-For-This- World’ Temple, I am super-anxious about what’s coming next. I have to admit, I am not really much of a comic reader, so I have no idea what is going to happen and whether Killgrave is really dead or not. I can’t wait to see more of this series and because Daredevil Season 2 is happening (!!!) I can not NOT imagine them not making a season two of Jessica Jones. Whatever is going to happen, Killgrave ‘Doctor-Who-David-Tennant’s-Evil-Twin’ better be dead. Or I’m probs going to cry. Yeah.

Excited yet? Here you can get more Jessica Jones stuff!