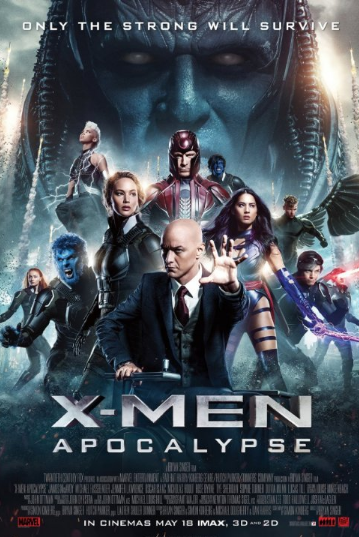 I have been looking forward to this movie since right after Days of Future Past.

“With the emergence of the world’s first mutant, Apocalypse, the X-Men must unite to defeat his extinction level plan.” [IMDB]

Apocalypse was believed to be the world’s first mutant, an all-powerful one, who had taken the body of several other mutants whenever he was close to dying. This way, he kept living and gaining whatever power his host would carry.

Apocalypse always took four Horsemen with him to protect himself. He would enable their powers to reach their full potential, making them way more powerful than they ever were or would have been. In this movie, those Horsemen were Angel, Psylocke, Magneto and Storm.

Set ten years after the events of Days of Future Past, I was afraid this movie wouldn’t do justice to the characters’ point of view on how the world handles mutants now, after they had been exposed as they were in DC. The movie didn’t do them wrong in my opinion. They had their varying opinions on how they should face the world and what they should focus on. Charles, of course, has the now successful school for gifted youngsters. Raven doesn’t share this point of view and is convinced the hatred towards mutants isn’t gone, just less visible.

They end up working together to beat Apocalypse anyway, along with some “new” faces. The events of Days of Future Past have wiped away all the franchise has built up so far (much like what Apocalypse wants to do with the world, he wants to wipe clean the earth to get a fresh start) including the way some of the most iconic characters were introduced. In this film, we get to see Scott Summers (Cyclops), Jean Grey and Kurt join the X-Men. We also get to see Evan Peters return as the very loved Peter Maximoff aka Quicksilver.

I am very much in love with all the characters. These new faces have brought the semi-fresh characters to life in a way I didn’t expect. There were many expectations these actors had to meet to make the characters acceptable and I feel like they have exceeded in doing so. They are exactly how I pictures them to be, after having seen all the animated X-Men shows, in which they are (usually) still students at Xavier’s school. They portrayed them flawlessly, giving the characters that little bit of comic/cartoon kind of vibe.

The story itself makes a lot of sense. Apocalypse was seen as a God in his early days in Egypt and then believed that that is how it’s supposed to be, that he is supposed to rule the world. He wakes up in 1983 where laws and systems are in place and their is not one explicit leader. He believes that this is wrong and he takes his four Horsemen with him to Cairo, along with Charles Xavier, to rebuild the earth.

He takes Xavier for the last ability he needs and thus plans to transfer his mind into Xavier’s body to gain his power of mind control, which he needs to rule the world. It is then up to the X-Men to save him and set the world free before Apocalypse takes over.

There are certain things in this movie that made me scream a little out of joy. Seeing Quicksilver in action, the Xavier institute for Gifted Youngsters, hints towards the very important Phoenix saga (which they did beautifully, not too much like they did in the first few X-Men movies) and of course Wolverine.

Although I do not fully understand Wolverine’s positon in this movie, I think there might be a logical explanation for it. In Days of Future Past, Logan started slipping between past and future, giving him a glimpse of what Stryker will do to him. This would be a warning to him to not agree to take place in Strykers experiment. At the end of DoFP, Logan is being fished out of the river by “Stryker” who is actually Mystique (the eyes go yellow as he faces the camera). This would not explain how he ended up in Strykers facility with the adamantium skeleton.

Enough discussions so far. I’ll leave the rest of the movie alone on the condition that you guys watch it as well, otherwise I will just have to revise every line from the movie to you personally, considering it is a definite should-watch for all Marvel fans. And if you haven’t seen any X-Men movie yet, don’t worry, you could just start with Days of Future Past because everything before that had been undone anyways.

In a nutshell:
Liked: yyyyeeeesss
Loved it: YES
Re-watch: Already did.
Cinema worthy: more than just that.