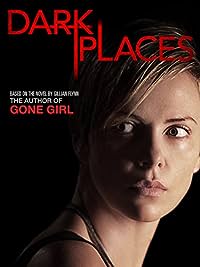 Libby Day was only eight years old when her family was brutally murdered in their rural Kansas farmhouse. Almost thirty years later, she agrees to revisit the crime and uncovers the wrenching truths that led up to that tragic night. (IMDB)

So the movie is about this woman Libby Day who lost her entire family at the age of eight. Her mother and two of her sisters were brutally murdered and her brother got arrested and put in prison for it. However there is this club that thinks her brother is completely innocent and might be covering for someone, the question is for who? Libby goes on an investigation about what really happened that day and around the time of the murders. She discovers some horrible truth about that night that would change her whole life.

The movie was good, it was nicely shot and the actors were great. However I’ve read the book before watching the movie and I highly regret that decision. If you don’t want any spoilers then don’t read the book, cause it’s exactly like the book. Every little detail! Normally I would love that but since it’s a thriller you want the excitement, the thrill and the nailbiting while watching, instead I was terribly bored. This is only because of the storyline though the rest was just great, the casting was great, the cinematography was great, I just made the big mistake to read the book first.

I always find it a bit weird to see Charlize Theron in a movie, I mean she is a great actress I just can see her as the woman in the gold dress in the Dior J’adore advert. I loved seeing Chloë Grace Moretz play a bad character for once, I know she was in Carrie, but I just always see her as a sweet girl, especially after If I Stay. It’s always lovely to see Nicholas Hoult in a movie, I just absolutely love him as an actor and and been following his work since Skins and he’s just great. So yeah the casting was nicely done and they fit the character descriptions from the book nicely which is always a pleasure to see.

Have you already seen Dark Places? What did you think? Leave a comment what you think of the movie and if you like this one or prefer Gone Girl?

In a nutshell:
Liked it: It was okay.
Loved it: No not really.
Re-watch it: Probably re-read the book instead of re-watch the movie.
Cinema worthy: No not really, I think Gone Girl was a better fit for the cinema.