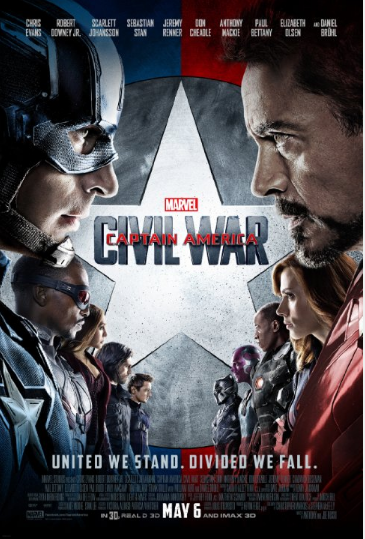 Honestly, I at first didn’t see this movie as a Captain America movie. There were so many people in it, it didn’t seem to be about Cap. They proved me wrong.

While I don’t disagree with that summary, it is very much incomplete. This movie is about something that was inevitable. The Avengers are facing a tough decision and they don’t seem to agree. Obviously. The decision to be made is to sign or not to sign the Sokovia Accords which will put them under supervision of a panel that consists of people from the United Nations, meaning that there will be consequences for the damage done while saving the world.

Meanwhile, there is some trouble around Bucky. Now THAT is what this movie is actually about. While they hammer on Cap to sign the accords, which he is against, he is on his own mission to find Bucky and keep him safe, which is a whole lot of trouble because he’s not the only one looking for him. Without spoiling too much in only two paragraphs, I will leave it at this and leave the rest of the plot to the actual movie.

Even though it is kind of a not-so-solo-movie, this is the best solo-movie so far in my opinion. The story is a very important one, considering the future of the Avengers is a big deal in this one. There are many great things about this movie.

The acting, for one, is amazing. They have all outdone themselves. Chris Evans, being torn between his best buddy and his team, the rest of them seeming to have to pick sides and the newcomers all set a great example of what they can expect from their characters.

About the newcomers, let’s discuss Wanda Maximoff. In this movie, after the events of Avengers: Age of Ultron, leaving her without her brother, Elizabeth Olsen does such an amazing job at portraying her hurt-yet-strong character. We see her in action as Scarlet Witch, on the Avengers team but also on her own, kicking ass in ways I didn’t know were possible.

Black Panther, as teased in the trailers, is a really strong character. Although I was not familiar with his background or “powers”, I was very excited to see him in action and to know where he came from, what his motives are and whether or not to see him as a bad guy.

And then, the one Marvel can’t seem to get enough of, Spider-Man. This movie was the perfect way to introduce Tom Holland as the new Peter Parker to the audience. They wrote his character as I think it should be written. A derpy teen, to be honest. After the somewhat-disastrous previous attempts to make Spider-Man successful, I was very pleased to see how this played out.

There was one major thing they led us to believe before the movie came out and in the trailers as well. Major character death. Of course it would have made sense, with the Avengers, old and new members both fighting against each other in this really epic battle which could have ended so badly, but they didn’t have to make us worry so much, right?! Anyways, you’ll know what I mean once you’ve seen it.

For the rest of the movie, which is mainly struggles about the accords and their disagreement on the Bucky-issue, there are some things that could have been done better. One of which really bugged me the second (yes, second) time I went to see this movie. The filming.

This has been a thing in previous Marvel movies as well. The action scenes are quite hard to follow, as it seems to all be filmed by hand. It is as shaky as can be and the jump cuts are a bit too much in my opinion.

Then one last thing I could not completely be at peace with is the fact that there is so much. Even though I really think they did very well on this movie, there are just so many people involved in this Captain America film. Sure, we have Iron Man playing a very big part in this but then there is also Cap and Iron Man’s teams, involving so many people that it, in my opinion, doesn’t always work as well together. Of course it is all a set up for the upcoming Avengers movie, and they’ve done it beautifully, but I wish they had done it more evenly when it comes to the involved characters.

While I understand both sides, I am leaning slightly more towards Cap’s side. Let us know which side you are in the comments and if you’re excited for the next Avengers movie!

Altogether I am definitely not disappointed. I can’t wait to see what comes next for the Avengers and how they’ll deal with the situation all these events have brought them in.

Bonus: Stan Lee’s cameo. I loved it. It was amazing.