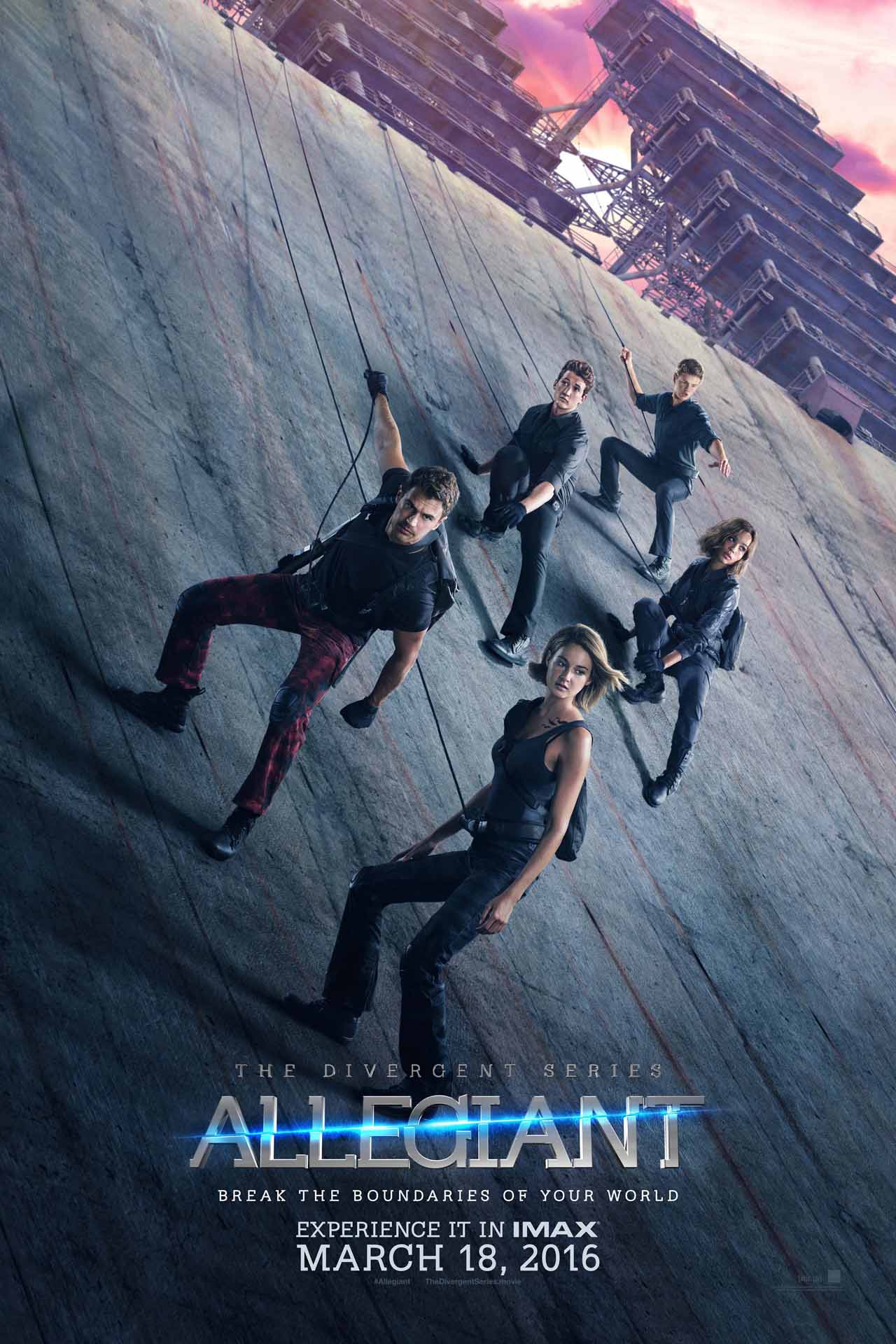 (3.5 / 5)
Spoilers: Only if you haven’t seen/read Divergent and Insurgent.

Last Friday, I got the chance to see Allegiant. It was March 4th, and joined by Joost, Jikke, Reza en Jesse, we went to Amsterdam for a special Press Premiere. I was so excited for the movie! I didn’t have very high expectations, due to the very negative reactions to Insurgent, but maybe that was good. I promised myself to not compare the movie to the book too much, because I thought that would ruin the experience. After all, what I wanted was to be sucked into a dystopian world with Tris and Four. And I was… surprised!

“After the earth-shattering revelations of INSURGENT, Tris must escape with Four and go beyond the wall enclosing Chicago. For the first time ever, they will leave the only city and family they have ever known. Once outside, old discoveries are quickly rendered meaningless with the revelation of shocking new truths. Tris and Four must quickly decide who they can trust as a ruthless battle ignites beyond the walls of Chicago which threatens all of humanity. Inorder to survive, Tris will be forced to make impossible choices about courage, allegiance, sacrifice and love.”[IMDb]

The movie starts off with a very important question: What is beyond the wall? Why can’t they leave Chicago and see “the real world”? Of course, there’s a lot of things happening in Chicago that keeps them inside. Now that the event Erudite queen Janine is dead, Four’s mother has taken over control. They are prosecuting the people that supported Erudite, which means that Tris’ brother, Caleb, is in danger as well. Driven by will power, Tris en Four decide to break him free, and escape Chicago. They team up with Christina, Peter and Tori and storm the wall. Unfortunately, not the whole group survives.

Outside, they soon find themselves to be followed by Evelyn’s crew (Four’s mother). Until this moment, everything in the movie seems pretty close to the book. I know I promised myself not to compare the book and the movie, but in my head, it happened anyway. While watching the movie, I was like: Yeah, this is good. This is better than Insurgent. Go filmmakers, you’re doing a good job. And then all of the sudden, out of nowhere, they decide to just canonball a truck in the air, a full “action movie” scene, that just didn’t feel right. It was overdone, too much, and it seemed liked the filmmakers tried to get the real action experience. No. Just no. It wasn’t cool, nor impressive. It was hilarious. I laughed. Sorry guys. But from that moment on, I thought: this is it. I’m done.

And then there was more technology and futuristic elements. They were flying in a bubble that’s created by a drone, there’s an invisible wall that keeps people from Chicago to the see the building where they are going. There are so much futuristic elements, that I lost track of what was really happening. This was also the point that my brains shut down and I stopped comparing the movie to the book. It. Was. Weird. Even though the CGI was amazing, to me, it felt like they had put too much distance between the movie and the book.

But, that doesn’t mean I didn’t like it. At first, I didn’t. Honestly, I hated it. But when the movie continued, I made peace with it. They actually seemed to merge the futuristic elements with the story line more and more and at a certain point I think I actually started to enjoy this new aspect of the film. It was a big transformation, but if you forget the book, you will actually really enjoy the movie.

As far as comparing the movie to the book and the CGI effects go, I think we just have to accept that the Divergent series is not filmed close to the book. But that’s okay. Because no matter how many technology elements they put in the movie, the story line was basically the same. The main points were the same, anyway. There were moments that I actually recognized an event from the book, and there were moments that I thought: this. is. not. what. happened. But like I said, once you make peace with the fact that it’s different, the movie instantly becomes better.

What I especially liked about this movie, compared to the other two movies, is the acting. They all have gotten so much better. Shailene has really put some extra layers to Tris’ character, and Four seems to finally realize who Tris is. Due to their great acting, I felt for Tris and Four and the distance that was growing between them. I wanted to scream at Tris at a certain point. But let’s be honest, haven’t we all? But my favorite was Miles Teller. Peter was the best thing in the whole movie. Without him, the movie would’ve been okay. But with him in it, the movie has much more humor. He knows how to make his audience laugh. The kind of laughing that makes you cry. I love him and because of him, the movie was much lighter. He added a spark to the movie.

I would love to analyse this movie some more, but this review is getting very long. Overall, I think they did a good job on making a YA movie, but not so much a YA adaptation. I liked Allegiant much better then I liked Insurgent. (Reading my review I said I was ‘positive’ about Insurgent, and since I didn’t have a rating system back then, I think I would’ve rated it with 3 stars). Allegiant the movie is very different from Allegiant the book, much of the reasons why that is, are caused by visuals, technological elements and CGI. I do believe this movie is an improvement to Insurgent. The actors have gotten better, so thumbs up to them. Overall, I’d say I’m pretty positive.

In a nutshell:
Liked it: YES
Loved it: Miles Teller should get a shout-out. So yes.
Re-watch: Definitely, but not right away.
Cinema worthy: YES, though I haven’t seen it in 3D.

What did you think about Allegiant? Did you like it? Let us know!

Also, you can get some cool Divergent/Insurgent/Allegiant stuff down here (also pre-order the DVD!):