As some of you may know, last Saturday, Veronica was in the Netherlands for a special, annual event, hosted by the wonderful people from Best of YA publishers. And this year, they got us a very famous and successful author: Veronica Roth! She’s best know for the Divergent series: the books about Tris and Four, living in a post-apocalyptic Chicago, in which all people are supposed to be fitted in one of the five factions. I went to the event together with Katja from That Blonde Woman. She took pictures while I was filming the whole thing, And this… is what happened. 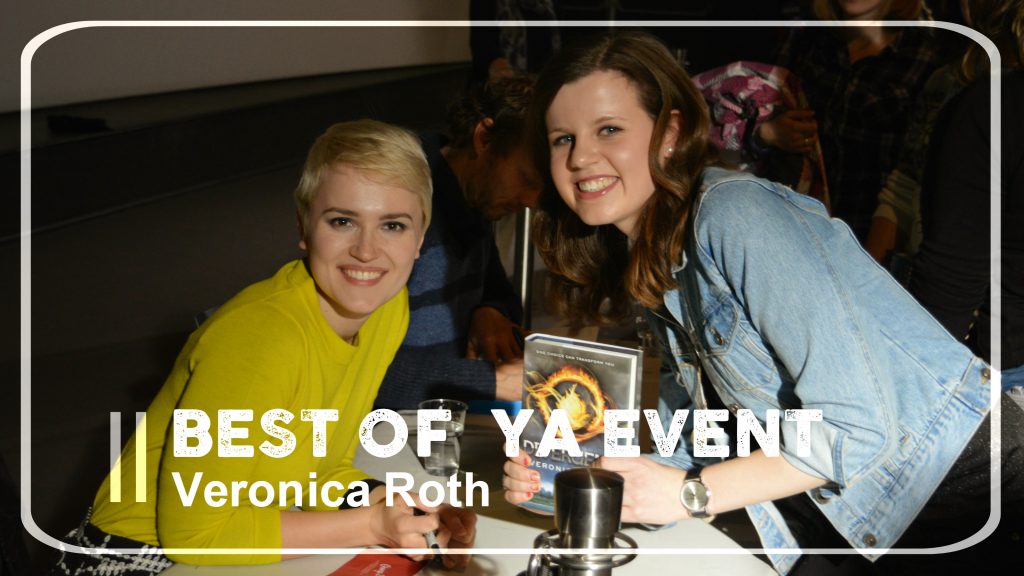 Because the event started early – at 10 am – we took the train of 7:45 am. Yes, this was a new thing to me, since I go to Uni which is 5 minutes by bike from my  house. We had fun at the train and arrived around 9 am at the Euroscoop cinemas at Tilburg, where the event was hosted. We helped the publishers putting posters of Insurgent at everybody’s seat and then both prepared for the filming/photographing part. Just before 10 am, the room was filling in. When everybody got to their seats, Insurgent started. We all watched the movie together.

After the movie, our presenter Bart got ‘on stage’ and presented to us the program. Then Buddy Tegenbosch – a Dutch author known for Oog om Oog – got on stage. Bart and Buddy talked about his books and his career of being an author. Buddy came across as a very nice, funny and talented guy and I am really looking forward to reading his newest book.

Then came the person we’d all been waiting for: Veronica Roth. I know, I know, she’s soooo gorgeous! Like: she could be a model if her writing career wouldn’t have turned out the way it did. She told us right away she was a bit anxious for interviews and big rooms full of people, which I think was a good thing. Bart interviewed her too, and then some lucky fans go the chance to ask her a couple of questions.

In the end, there was a panel discussion with Bart, Buddy, Emmy (www.zonenmaan.net), Maria (Dutch translator of Twilight, Divergent and many more books) and Veronica herself. The panel was hilarious and it was nice to see all of these awesome people interact and discuss books. In the end, it was just a gathering of bookjunkies, am I right? I think yes.

Luckily, everybody got the chance to sign one of their books and have  a quick chat with Veronica (and Buddy). Honestly, she was very different from what I expected her to be. I’d seen one of her earliest interviews, and thought she was kind of a stiff. But after hearing about her anxiety, and talking to her at the event, my whole opinion about her changed. She was incredibly polite to everybody (and we were with over 200 people), she smiled a lot, she was bubbly and really listed to what you had to say to her. I got her a chocolate letter (chocolade letter) and some marzipan piglets – if you’re from the Netherlands, you’re probably familiar with this.

If you weren’t in line for an autograph of Veronica and Buddy, you could get your own temporary Divergent tattoo or buy a book in the hallway. Of course there was lots of popcorn involved.

After the event, Katja and I went home, very happy about our experiences. I want to thank all of the people from Best of YA, Veronica, Buddy, Maria, Bart, and also Emmy, Joost and Reza for starring in my vlog, Euroscoop and all of the fans that came to visit the event! I enjoyed it sooo much!

P.S. all of the pictures are made by Katja!