I’ve been obsessed with the Romanovs, more specifically Nicholas II, the last tsar of Russia, ever since watching the animated movie Anastasia. This movie tells the story of an orphan girl with amnesia looking for her family, and a grandmother looking for her only surviving grandchild, all based on the myth of the real Anastasia, who was rumored to have survived the horrible attacks in 1918. I felt so terrible about how somebody could just kill a whole family, an entire dynasty, and spark a revolution in a country at war. Just like everybody, I was fascinated by the ‘what ifs’ of the survival of Anastasia. If you’ve been obsessing about this like me, you’ve probably learned that all remains of the last Romanovs have been found and have proven that Anastasia (and neither Maria or Aleksej) has not survived.

The myths and the rumors surrounding this story have kept people busy for ages. And there has been tons of populair media covering this story. If you’re interested in this, I’ve made you a list of media that have covered this story and will rate how much dedication this will need from you. (If you’re not very invested yet, I’d recommend you to just watch the animated movie). Let me know down below whether I’ve sparked your interest! (1 / 5)
Summary: The last surviving child of the Russian Royal Family joins two con men to reunite with her grandmother, the Dowager Empress, while the undead Rasputin seeks her death.
My thoughts: This movie sparked my interest in the Romanovs, and looks into the ‘what ifs’ of the survival of Anastasia. They’ve altered tons of facts to make it suitable for children, and they left uit a couple of important happenings, but I think as far as a historical movie for children goes, this one is pretty good. I love how this story has a somewhat happy ending for Anastasia, whilst in real life she didn’t survive. Remember: the song Once upon a December will be stuck in your head forever.

(2.5 / 5)
Summary: Inspired by the beloved films, ANASTASIA transports us from the twilight of the Russian Empire to the euphoria of Paris in the 1920s, as a brave young woman sets out to discover the mystery of her past. Pursued by a ruthless Soviet officer determined to silence her, Anya enlists the aid of a dashing conman and a lovable ex-aristocrat. Together, they embark on an epic adventure to help her find home, love, and family.
My thoughts: I cannot wait for this musical hits theatres in the Netherlands (September 2019), to see this movie as a musical. The musical is based on the animated movie and thus will feature original songs as well as new songs. I put in a

(2.5 / 5) for dedication as this is an expensive undertaking, but it lasts for 145 minutes and is quite the experience, especially if you love musicals. 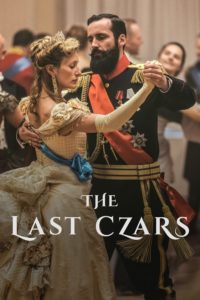 (3 / 5)
Summary: The Last Czars is a six-part series that breaks down the political machinations of the Romanov dynasty during Tsar Nicholas’ reign. In 1918, Russian Revolution agitators overthrew the monarchy in Russia and had Nicholas; his wife, Alexandra; and their five children killed after a reign that wasn’t exactly the greatest. The finale of the Romanov dynasty marked the beginning of the modern world, which makes this series a must-watch. (via earnthenecklace)
My thoughts: I am pretty torn about this series. On the one hand, I was a fan immediately – it has drama and historical facts. It has actors and historians. It’s dramatic, and it’s honest. But it’s very flawed as well. There have been made over a 40 mistakes in this series, and thus there are a lot of inaccuracies. Details, yes, but faults nonetheless. However, it’s a visual spectacle and in many was tells an unique yet very sad story. I recommend this a lot, despite it’s inaccuracies.

(5 / 5)
Summary: The Romanovs were the most successful dynasty of modern times, ruling a sixth of the world’s surface for three centuries. How did one family turn a war-ruined principality into the world’s greatest empire? And how did they lose it all?
My thoughts: This books tells the WHOLE Romanovs story, from the very first Romanov tsar in 1613 until the very last and most famous tsar Nicholas II in 1918. I am reading this book right now and it is very detailed and hard to get through, but damn, it’s fascinating! You will learn all about the dynasty and how hard (and sometimes dangerous) it was to be a tsar. But without a doubt you will need a lot of dedication to get through this book.

What would you like to watch or read? Let me know down below in the comments!