IT IS MARVEL MONTH HERE AT DBC. So, while there is some controversy regarding the ‘best’ Avenger character (as you can see in the hype over Civil War with #TeamCap #TeamIronMan), there are some films that are better than others. While there is a ‘correct’ way to watch all the Marvel films (check the Marvel Guide here on Dutch Book Chick!), there also is a way to watch the films, disregarding continuity, based on how good they really are.

I’d like to make a disclaimer here that I have (at least tried to) ignored my own personal feelings about some of the characters (unpopular opinion: I hate Captain America) and tried to rank them following the people’s opinions and thoughts. As a guideline, I have used Buzzfeeds post (but I have made some changes) which you can view here. So, without further ado, LET’S GO!

We all love good ol’ Bruce Banner in the Avengers when he is played by teddybear Mark Ruffalo, but the Hulk is not as ‘sweet’ in his own film. I personally have tried to avoid this film as long as possible, since I had already heard this film is not too good, and they were right. When you think of the Hulk, you think of Ruffalo’s portrayal as him in the Avengers films. Ofcourse, in this film, Marvel needed to throw in another romance (not necessary Marvel please stoP), as they did in Avengers: Age of Ultron. The bad guy here, Emil Blonsky, just pops up out of nowhere and starts ransacking (great word) the place. Character development? Dramatic backstory? Epic sidekicks? None of the above.

Y’all kno I love my boo Tony. I am 1616513% #TeamIronMan, but this film was just kinda disappointing? Compared to the first Iron Man (which rightly has a higher position in this ranking) and the last Iron Man 3 (also waaaay up), this one is kind of smooshed in the middle. We have hour greasy, baddy-bad guy Ivan Vanko, who does not really do anything expect Whiplash (see what I did there?) Tony out of the racecar. Tony’s always amazing I-am-so-cool-nothing-can-touch-me behaviour which follows is kinda (dare I say it?) annoying almost. Dude, you almost died, Pepper cried, this is a threat, hello please wAKE UP. My future husba…, I mean Tony does wake up and slays Vanko, but it is all just so predictable and not fun. It is just your average good-guy vs bad-guy action packed film where you do not have to worry about anything or pay attention to anything because you know the good-guy will win. Which he does. Obviously, he is Iron Man I mean have you seen him?

The reason for this low placement of Antman is as follows: his superpower is controlling ants. And Marvel Studios chose THIS as their next project instead of a Black Widow film? Unforgivable. Still, the films is saved by the lovely Scott Lang, who gives this film a nice humorous twist. Hope, who they wanted to portray as a strong independent woman, comes across as a bitchy little girl. In the beginning of the film she has no respect for her father or Scott and she basically does whatever she wants while bitching about it. The weird thing of this film is that they actually made ants kind of…. cute? I mean they are still creepy crawlies and weird but still (please tell me I am not the only one who thinks of it this way).

So yes we now know that I am not a fan of Captain America, but this will not cloud my judgement (see the next films on the list). But this film just did not do it for me. My biggest problem with Captain America, especially in this first part, is that he is so bland, standard and unoriginal. Every film (Marvel or not), no every AMERICAN film, has a character that is all about freedom, bald eagles, capitalism, free market and who hates the Russians/Germans/Japanse and sadly, this film is no different. While Red Skull is an amazing villain (talk about #plottwist) Captain America is bland. His (b)romance with Bucky is nice and all but does not really add anything to the story. Peggy is an amazing B.A.D. bitch whom I love, but ol’ boy Steve is just nothing original.

When I heard the next Avengers film was coming so soon I was SO excited. O my God, I could not wait I love all the characters so much and yes this was IT. While the humour was better in this part compared to the first Avengers (which was not really that difficult), the story was less. And I am not just saying this because Loki was not there! The Maximoff siblings were an amazing addition, but it was weird since they were called ‘enhanced’ in the film while we Marvels-fangirls/boys/everything-in-between KNOW that they are bloody X-Men come on. But since the X-Men franchize is part of Sony, they could not use that word. That little thing aside, another thing that greatly bothered not only me but a whole lot of people was the constructed romance between Banner and Romanoff. This was not necessary please Marvel learn from your mistakes! Vision was bloody great tho, but nothing can surpass the original Avengers (except for maybe Hawkeye and his farm).

Bucky is annoying. There I said it! He says almost nothing in this film and people still love his ‘broody-ness’. Come. On. I mean Black Widow was AMAZING (but when is she not), but the whole film was about Steve and Bucky’s Romance (I refuse to call it bromance #Stucky2k16). ALSO Falcon is great because there is now some diversity and I love that (and don’t we all love an extra handsome man). But Bucky is annoying and Cap still has some of his old characteristics I have discussed in the first film. Buzzfeed has this film at the top of their list (I really don’t think it should be n0.1) and maybe I am a bit harsh on ol’ Steve but at least he is in the middle. And I like to create controversy so please start a war in the comments below. 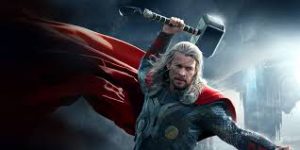 First: have you seen his beard? I am a woman and I want that beard it is so creative but classy but badboy-ish but also screams I HAVE MONEY, which, I mean, is never a bad thing right? So this film is at least ten times better than the second Iron Man film and it has so much character depth, right from the start. While most (Marvel) films take time to fully describe their characters (Steve Rogers) here it starts right at the beginning. It has a great dose of action too. The only thing I hate (as I have said before) is that the film screams Americanism. The people in the Middle-East are here represented as the only thing they are in the eyes of Americans: terrorists. But I cannot always be intensely politically correct so if we look past that all that is left is an amazing film with great characters, an amazing storyline and great depth.

MORE LOKI. MORE ABS. MORE CHARACTER DEVELOPMENT. #LOKIFORKING2K16. (I hope Eric finds his pants and that Darcy and the boy are married and get 5 cute-ass kids).

Chris Pratt looks amazing. Gamorra IS amazing. Groot is just so cute. Rocket I want as a pet. Everything about the horrible humor of the first Avengers is done right in this film. Everyone has nice little snapbacks and all characters have a fitting image. The film has just the right amount of comedy, but also enough tragedy (I cried at the beginning and the end). I cannot wait for the second part and I want to see more Gamorra because she kicks ASS. It is also nice to actually take a break from the whole Avengers thing and get really something ~from another Galaxy~ and to see that it is actually really good.

This was actually the first Marvel film I saw in cinemas. I know I have bitched about the humor of this film, but it rightly has a place in the top 3. It just has this position of a classic. This was the first film where all the Marvel heroes thus far were reunited to fight the sexiest villain of all the universe. The film starts off rather slow, but it certainly picks up (too much?) pace at the halfway mark. The only thing that kinda bothers me is that within 0.002 seconds every bitching Avenger is suddenly ready and reunited in this big brotherhood to fight the bad guy. But still it is SO good. You’ve got to love every character and the action scenes where they fight with eachother are just breathtakingly good.

Pepper is more than just a sex-objec! Yay! Pepperony is definitely a thing (for just about 2 hours unfortunately) and there are 265106520 more Iron Man-suits than we thought there would be! Ben Kingsley is a beautiful man and is hilarious in his performance as the fake terrorist. The blond bad guy is maybe a bit to pretty and sassy, but I mean compared to Tony Stark himself the balance is just right. The fire-people are a nice touch and I also cried when Pepper came in and kicked ass. The film starts off with an amazing change in Tony’s personality following the Avengers (I love it when they go back to an old Marvel film), but also has comedic relief thanks to my man Ben. It’s just a great film and I will fight everyone who says it isn’t. And you bet yo ass that I am ready.

A CAPTAIN AMERICA FILM ON NUMBER ONE. Yes. But this really was not a film about Captain America since it was more a third Avenger film (again, without my boo Loki). But all the new characters!! BLACK PANTHER IS A BEAUTIFUL BEAUTIFUL MAN AND I WANT TO HAVE HIS BABIES. SPIDERMAN WAS ACTUALLY GOOD (?????? can you even believe it), ANTMAN WAS BETTER HERE THAN HE WAS IN HIS OWN FILM (??????), AND BUcky was sadly as annoying as ever. I cannot blame Tony that he wants to kill Broody McBroodface since he killed his parents and Steve knew? Like what the hell man get over your excuse of ‘but I wasn’t myself’ bullshit. Also #Stucky has been more alive than ever after this film since the only thing that made this film ‘Captain America’ was the fact that 50% was about Steve and Bucky kicking ass together. Black Widow was beautiful too. Hawkeye is a silly boy whom I just want to cuddle and Blank Panther is just. W O W.

So this was our Top 13 of the Marvel Films which are out thus far ! There will be some people disagreeing with this choice of ranking, but hey, that is the fun bit ! Everyone has different opinions which film was better or which #Team they are on, but that’s what makes it great. This does not mean you cannot start a massive discussion in the comments though, cause please do it is amazing to see people’s passions about films and Marvel specifically.

But if you insult Tony (or Loki). You’re dead.